Clubhouse has disowned phone numbers on the dark web allegedly stolen from their servers. This is after cybersecurity experts claimed that the stolen data was for sale on the black market. Additionally, the experts say that the hackers have access to 3.8 billion phone numbers belonging to Clubhouse users. Cybersecurity expert Jiten Jain shared the news through his Twitter account. Jain also attached a screenshot that says that the data is going for $3 billion. 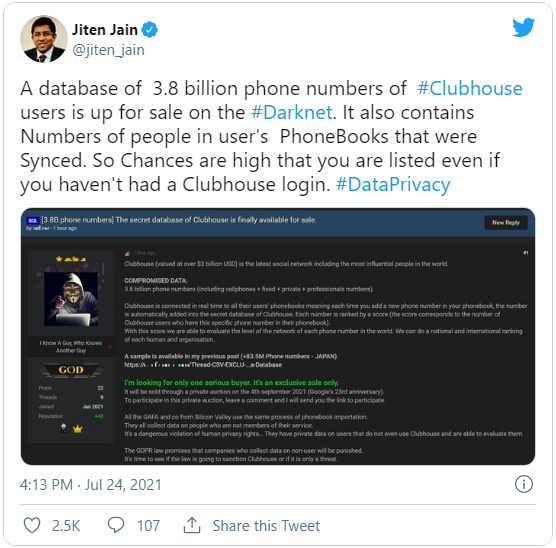 On July 23rd, hackers claimed to have more than 3.8 billion phone numbers from the <u>Clubhouse</u> database. According to the hacker's post they have access to various numbers. Including numbers of the most influential people in the world.

Moreover, they claim that they assessed the network level of each phone number globally. They also claim that they can carry out international ranking of individuals and organizations. Besides, they announced that they would trade the leaked data in the dark market. The private auction will be on September 4th, 2021. Yes, it's the same day as Google's 23rd anniversary.

Additionally, the hackers say that Clubhouse has a real-time connection to the users' phonebooks. This means that whenever you add a new contact, it syncs to the Clubhouse servers. Even so, the claim may be valid as the app shows new users from the phonebook.

Clubhouse Disowns Phone Numbers Being sold on the dark web

While speaking to the IANS news agency, Clubhouse disowned all these claims. The audio-based platform said they haven't incurred any breach. Moreover, they claim that billions of phone numbers are generated by a series of bots. So, it's a mathematical coincidence if one of the numbers exits in their platform. Additionally, Clubhouse said that their API doesn't return user identification information.

Views Of Cybersecurity Experts in The Alleged Leak

Evidently, various experts have given their opinions on the issue. Among the experts is the admin at Hacks and Security, Sunny Nehra. Nehra says he has seen such claims from the hacker before, and the leaks are usually fake. He says that the list provided by the hacker contains phone numbers that can be easily extracted.

In every country, there exists thousands of databases with only phone numbers. Nehra questions if the hacker had just put the lists together and tagged it as a Clubhouse leak. Moreover, he says that such forums are usually full of fakes.

Nehra also posted a tweet in Twitter account giving his views on the issue. In his tweet, he states three facts. The first is that the hacker offers free samples. Still, to unlock the samples, you need eight credits. Secondly, the data only contains random Japanese numbers. And lastly, the hacker is new to the forum and isn't active enough to make such claims.

Another expert, Rajshekhar Rajaharia, said that the phone numbers sold by the hacker seem to be randomly generated. He adds that there are no photos or names, or extra details accompanying the data. Furthermore, Rajaharia says that the database does not contain any personal identification information.

If you wish to take a look at the hacker's sample, you can visit the darknet. The dark web is a part of the internet that serves as a black market forum. To gain access to the dark market, you'll need unique browsers like the Tor browser. Moreover, you'll need URLs to the marketplaces. With the URL and browser, you'll be set to go.

The National University Of Singapore Society's website has been hacked. As a result, personal data belonging to 1,355 members has been stolen. The data is now being sold on the dark web. According to a report delivered by NUSS on Monday (Nov 1), the website was hacked early last month. read more
By J.Austine - Nov. 3, 2021, 6:25 p.m.

CoinMarketCap Hit: Over 3 Million Email Addresses On The Dark Web

BloodyStealer Terrorizing Gamers and Selling their Accounts on the Dark Web

Kaspersky researchers have come across an advanced Trojan. It goes by BloodyStealer and is on sale on the dark web read more
By J.Austine - Oct. 11, 2021, 11 a.m.

Billions of User Data on the Dark Web

A survey reveals that the user data of 1.5 billion Facebook users got listed for sale in the darknet. The information got collected by a process called “scrapping.” Moreover, it is a godsend for hackers looking to launch a phishing attack. read more
By J.Austine - Oct. 6, 2021, 3:39 p.m.